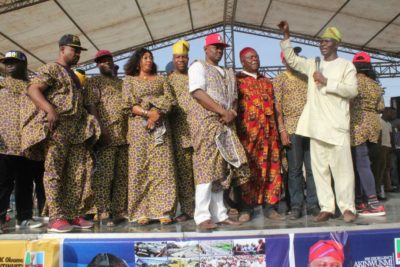 It was a gathering of timbers and calibers of political gladiators as they unanimously endorse Ambode beyond 2019. The medium was also used to sensitize people for the need to get their permanent voters card (PVC) which has been said to be the only weapon to ensure Ambode’s continuity.

According to the APC LGA Chairman, Hon. Olamide Kasali, during his opening address, the vision of MC Oluomo has become a reality as the people of Oshodi have again affirmed their support for Ambode as a result of his lofty laudable projects that have transformed Oshodi to trajectory of development. 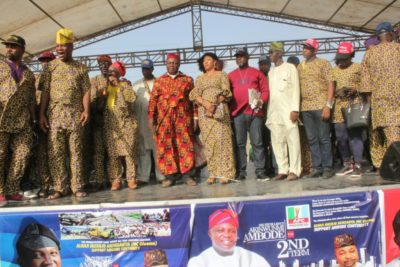 He also appreciated the immense support of Oluomo to progressive party since time immemorial, with courage not to relent in his good deeds to the party.

The Chairman, Oshodi-Isolo LG, Hon. Bolaji Muse-Ariyoh, who was represented by his vice TPL, Timothy Daisi Oso, viewed the day to be a moment for people to speak unequivocal and authoritatively to confirm the endorsement and their unflinching support for Ambode whose impact in Oshodi is indelible.

In the same vein, the representative of Oshodi-Isolo constituency I at the Lagos State House of Assembly, Hon. Hakeem Shokunle, admitted that the endorsement showed that the people of Oshodi are in support of His Excellency Ambode whose giant stride is seen in Oshodi and Lagos at large.

Also speaking, the Special Assistant to Governor Ambode on Civil Engagement, Hon. Taiwo Ayedun, said that the only panacea for developmental continuity in Oshodi, is for people to give Ambode their massive votes.

The gathering was full of excitement and fun as many artists such as Small Doctor, DJ real, Nollywood stars entertained people with melodious songs and performance.