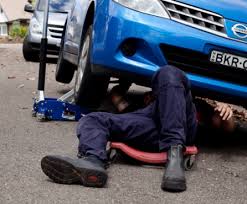 The Oshodi-Isolo Local Government has warned the automobile technicians converting setbacks of roads in Oshodi and its environs to workshops to desist.

The Local Government Chairman, Hon. Idris Bolaji Muse Ariyoh gave the warning during a conflict resolution meeting between the residents association of Sehinde Callisto and mechanics using the streets as workshop  on May 21, 2019 at the conference hall of the local government secretariat.

The Chairman frowned at the arbitrary use of the government’s property which has caused major damages to the roads within the community.

He said: “I have received different petitions from the landlords on Seinde Caslito street on how the operation of the ‘mechanics’ on the street has been causing impediment to the free flow of traffic and damage on the road. It is in the interest of peaceful coexistence that I called for a parley meeting through which a peaceful resolution can be achieved.”

The council Boss during the meeting gave the mechanics an ultimatum of 31days to look for an alternative place to be used as a workshop while imploring the companies operating on the street to develop the culture of contributing to the community development through Community Social Responsibility (CSR) to their host community.

He also warned them to observe the law on double parking, adding that if obeyed, it would restore sanity to the roads and allow free flow of vehicular movement.