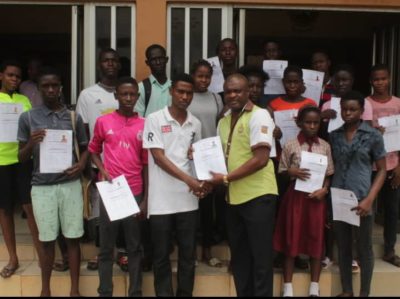 Some of the beneficiaries

As part of his efforts to develop educational sector in Oshodi-Isolo Local Government Area, the Council Chairman, Hon. Muse Bolaji-Ariyoh has distributed about 100 fee General Certificate of Education (GCE) examination forms to the indigent students within the local government area.

Speaking on the gesture, Ariyoh said that it was borne out of the passion to assist the less privileged students and self-training individuals who could not afford the GCE forms after failing one or two subjects in WAEC.

He said, “We have purchased 100 GCE forms for the benefit of our children who might have challenges in the just released West Africa Examination Council (WAEC) result and those who are financial incapable of obtaining the form.”

is to ensure that people have quality education, considering the fact that some parents could not sponsor their children’s education.

He therefore appealed to the financially blessed individuals within the community to do the same by partner ing with the government through private partnership programs on education, maintaining that education requires joint effort of everybody especially at primary and secondary school levels.

The Supervisory Councilor for Education, Hon. Ganiu Mejidade distributed the forms to students across the wards in Oshodi who were at the council to register for the exam via online.

While distributing, Mejidade advised the students to ensure that they cultivate reading habit through the use of public library in the local government to pass with flying colours.

The beneficiaries commended Ariyoh’s kind gesture which has given them another opportunity to excel in their educational pursuit.

The information about the free GCE form was disseminated through the CDC, market women and women association after emergency meeting held with them.