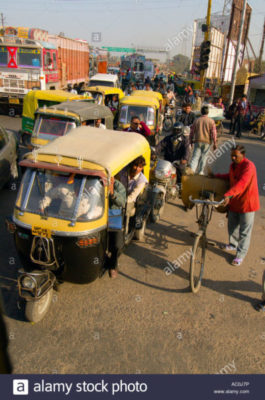 Persistent difficulty in moving in and out of the Low Cost Housing Estate, Oke-Afa is at the top of residents’ complaints against the inconsistent monitoring of the entrance by the Lagos State Environmental Service Corps.

Urging the LAGESEC to decongest the entrance of the commercial motorcyclists and street traders, the residents appealed to the concerned government authority to aid the action as soon as possible.

They noted that indiscriminate packing of commercial tricycles, vehicles and motorcycles by owners as well as uncoordinated business activities at the Estate entrance cause the problem.

Adeyemi said the entrance has become a total mess and nobody, including the government, is doing anything to put corrections to it.

He stated that the residents had reported the situation to the local council in Ejigbo but yet to see action towards curbing the situation.

He noted that okada riders and other commercial transporters would block the entrance as early as 6am till around 10 at night.

He said: “The danfo drivers do give us a lot of problems with the park and pick up of passengers while the traders are also a major problem at the Gate. Most of these traders are not living in the Estate and yet they come from neighboring towns to mess up our entrance for us.”

He maintained that the Police and the Lagos State Transportation Management Authority (LASTMA) officials have not been able to checkmate the situation.

“The Police and LASTMA officers there passing traffic are just being paid unnecessarily and there is this environmental sanitation team called LAGESE stationed at the Gate to check all these things but they all engage themselves in one bad act or the other to enhance our sufferings.

“Though we have discussed with one of the LAGESE staff members and he claimed the thugs at the Gate are the ones stopping them from doing their work. We made him understand that as a government agency they have the right to do the needful to ensure we have a better environment here.”

“It is a pity that some of our so called elders and some unreasonable youths are the cause of our problems. They put their selfish interests ahead of community’s development. I heard these traders pay illegal fees to the aforementioned people to make sure we the innocent residents suffer.

“We call on the Lagos State Governor, Akinwunmi Ambode, to help us out of this mess we find ourselves. We also want to call on the incoming Governor, Babajide Sanwo-Olu to begin to end this mess for us. An elderly residents was even robbed of N150,000 recently all because of the situation of the entrance and overcrowding there.

“The issue needs to be addressed from the state with a consistent action as all the people destroying our entrance are stubborn.”