Our security effort has reduced crimes in Ejigbo – Soloko 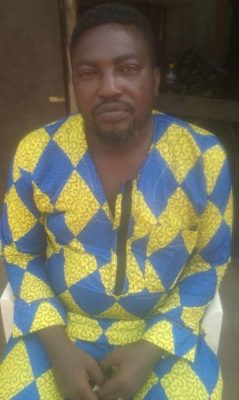 A member of the Oodua People’s Congress (OPC), a vigilante group, has declared that with its efforts, the rate of criminal activities has drastically reduced in Ejigbo community as many culprits now engage themselves in legitimate jobs.

Speaking with Echonews on security situation in the environment, the OPC Coordinator (Otunba Gani Adams Faction), Oluwalogbon Zone, Ejigbo, Gbenga Agunbiade known as Soloko, said the vigilante group has been making efforts to get the community rid of miscreants, hoodlums and robbers, working hand in hand with the police.

According to him, combating criminals is not ease but with the support of the police, he and his team are making progress in getting rid of criminal activities in the community.

His words: “It has really reduced, so much reduced. I can tell you that some of the boys in those acts, having discovered that we and the police have curtailed their acts, stopped and went into vocational training – fashion designing, aluminium works, barbing and others.

“Some even went as far as getting for themselves, tricycles for transportation business in the community. When I discovered this, I was impressed because it shows that our target is being realised little by little although, we know there is more to be done.”

“In terms of the police, I have to say that they have been with us in tackling crimes. Kudos to the DPO, Ejigbo Police Division, CSP Olabisi Okuwobi. She has the residents of Ejigbo at heart. Whenever we call them to notify of a criminal incident, she sends her boys here.”

However, he warned the youths to desist from any form of criminal and unscrupulous activities in the area as the group would not be at peace with anyone caught terrorising the community.

“Every youth should be engaged in something legitimate. If a youth is busy with something, there would be no time for him to think about going into robbery, cultism and the likes,” he said.

Agunbiade, known as Soloko noted that there have been occurrences of distress calls from the residents which have moved his group to action to arrest micreants terrorizing residents in the area.

He emphasized that the partnership between his group and the police has yielded positive results.

He however said that there were lots of work still to be done to prohibit vicious activities in the community.

The security worker revealed that the culprits such as cultists, robbers, kidnappers and others always attempt to bribe him, resulting to attacked when he refused to compromise.

“But the attempt to make sure there is a stop to criminal acts in Ejigbo continues.  I know that some of them have voodoo men behind them, but we won’t desist from getting them caught because I have a strong dislike for stealing.

“I like being a resident of a calm place. It’s not that we will sit here and hear that a robber went to a house and took away valuables. That means our power is a waste. We must use our fetish means to not only get these criminals to face the law but also ensure the community is free from crimes,” he said.