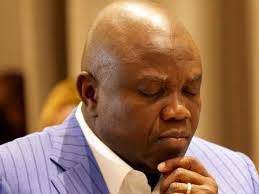 Following a report by an online media platform, makeitglobal.biz, that the Managing Director of the Lagos State Signage and Advertising Agency (LASAA), Bolaji Sanusi, was among those instigating the move to get the Lagos State Governor Akinwunmi Ambode impeached, the LASAA MD has denied the rumour, saying he could never betray his principal.

The online medium had earlier on Thursday reported that Sanusi and a former Commissioner for Information in Lagos State, Dele Alake were among those instigating the move to get the governor impeached.

It had reported that the political rift between embattled Lagos State Governor, Akinwunmi Ambode and his political godfather, Asiwaju Ahmed Bola Tinubu has crossed the Rubicon, and the Tinubu camp was poised to fully activate an impeachment process against Ambode.

The medium reported that it gathered from impeccable sources close to Governor Ambode and Tinubu camps that the impeachment move would have been activated by now if the appointment of Kayode Egbetokun as Lagos State Commissioner for Police, had been upheld. Egbetokun was the Chief Security Officer to Tinubu when he was the Lagos State Governor.

makeitglobal.biz reported as quoted: “A source said, “You know the full backing of the Police would be needed when the State House of Assembly begins the impeachment process to either protect the legislators or prevent hoodlums from disrupting the sessions. That is why the reversal of Egbetokun’s appointment as Lagos CP has punctured the impeachment momentum.

“Another source in the Tinubu camp said key members of his political dynasty such as a former Governor, a former Commissioner for Information in Lagos State, Dele Alake, a current senior cabinet official and the Managing Director of Lagos State Signage and Advertising Agency (LASAA), Bolaji Sanusi are playing active roles in instigating Tinubu to nail the political coffin of Ambode by giving the go-ahead for his impeachment,” it reported.

However, in a statement, Sanusi said: “It is ridiculous and laughable that some disgruntled elements wherever can sit on quicksand to concoct this spurious accusation. They have failed, ab initio in this satanical, ill conceived plot.

“I remain a loyal appointee of His Excellency, Mr. Akinwunmi Ambode, Governor of Lagos State. The detractors are looking for relevance where they’ll get none and their plot to divide the APC in the state has failed abysmally.

“I am too ingrained in how to make LASAA an enviable institution in the past three years and to also make an appreciable impact in the governance of Lagos than to be detracted by the handiwork of proponents of fake news that we’re all trying to remove from our social media hemisphere. I remain loyal to my principal.”

The LASAA boss said how could he have been part of any impeachment while he is neither a member of the House of Assembly or the governor’s cabinet member.

Echonews gathered that the report might not be unconnected to the sanction of a staff of LASAA caught in the act of fraud, who is now looking for favour from the governor.