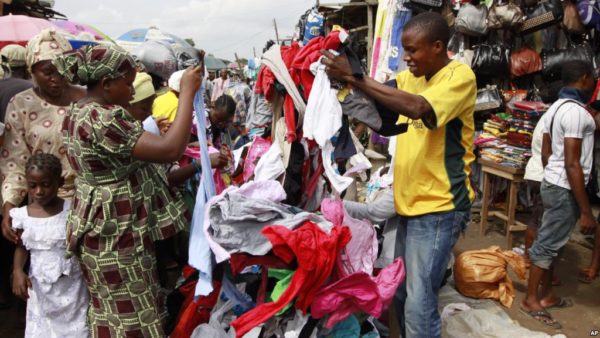 Festive period is supposed to be a boom period for traders especially those who deal in fabrics and foods, however, this season has been otherwise as traders who deals in fairly used clothes popularly known as “okirika” in Oshodi market have complained about denial of access to Cotonou market by the Nigerian Customs Service (NCS).

Cotonou has been the major market where most traders from Nigeria normally get their goods available for their customers on routine of Mondays, Wednesdays and Fridays Opening of new stocks in the Market.

Some of the traders, who spoke to Echonews at Oshodi Market said their efforts to get new stocks for people for the Christmas and New Year celebration was abortive as they barred from getting entry into the Cotonou Market.

Meanwhile, the regular customers and those who need the second-hand clothes have lamented scarcity of new supply as they would not be able to change wears for this festive period.

They pleaded with traders to make new stocks available as most of them depends on fairly used clothes due to insufficient incomes for new clothes.

The traders have also been complaining poor sales as customers are not ready to put in their hard-earned incomes on old stocks which would not go down well with the festive celebration.