The Lagos State Universal Basic Education Board (SUBEB) has demolished an old block of six classrooms to pave the way for the construction of a new block at Temidire Primary School, Shogunle, Oshodi.

According to the Education Secretary (ES), Oshodi-Isolo Local Government Education Authority (LGEA), Barr. Femi Ogunwusi, the demolition of the building was the first step, saying the second phase of the rehabilitation would soon commence. 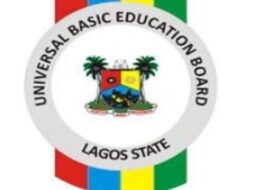 He said though SUBEB has not informed the Education Authority when the second phase of the rehabilitation would commence, he was sure it won’t be long.

He noted that the demolition exercise was carried out before the pupils resumed so as not to subject them to risk of being hit by the rumbles during demolition.

Apart from the classroom building, the school gate which was pulled down has been reconstructed.

ECHONEWS gathered that some hoodlums had been taking advantage of the damaged gate to gain entrance into the school compound to perpetrate their nefarious activities while turning the dilapidated building into a toilet.

It was learned that the building has been abandoned by the school management due to its deteriorating state in order to safeguard the pupils against danger.