Strong signs that the sudden drop in passenger traffic at Oshodi Transport Interchange from 580,336 in September to 251,456 in October due to the nationwide EndSARS protests is giving way to a rebound as recent figures of the traffic show that total passengers’ turnout is climbing up the stairs.

No fewer than 510,390 passengers used the exchange in November, just 69,946 passengers less than the traffic in October when the exchange was just recovering from the COVID-19 pandemic and before the protest.

But the comparison with the month of October captures the upswing better by showing that 258,934 more passengers boarded buses in November than in October.

On the average, the terminal picked 15, 978 passengers per day during the three months of September to November, slightly more than half of the 30,000 passengers it picked on Thursday September 3, this year when it launched its inter-state operations at Terminal 1.

The interchange runs three terminals – 1 for inter-city, 2- for the Oshodi-Abule-Egba Bus Rapid Transit route and 3- for intra-city destinations from Oshodi. 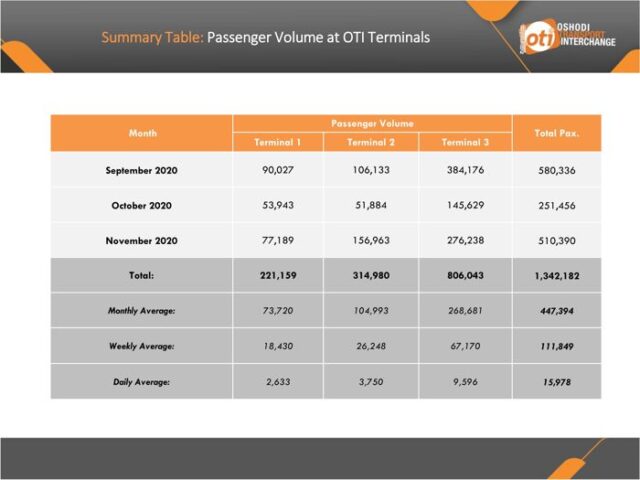 The figures show that terminal 2, launched in August by Governor Babajide Sanwo-olu is the fastest recovering terminal in terms of passenger traffic overtaking its September traffic of 106, 133 by 50,830 passengers and tripling its October performance of 51,884 passengers to achieve 156,963 passengers.

Analysts believe the instant success of Terminal 2 is not surprising considering the density of the corridor, the fairly short 16. 38 kilometre route and the shorter turn-around speed.

Add to this the competition among five bus companies including Primero, TSL and LBSL ensuring that passengers are picked up as fast as possible unlike routes where they have to wait for long to get on the buses.

A similar traffic upsurge was predicted for the inter-city hub of terminal 3 with the expectation of departures rising due to the opening of the terminal to the buses plying western, Eastern and Southern routes.

While Terminal 2 is recording the fastest recovery, the Transport interchange will still rely on the modest pace of Terminal 3’s flight to regain momentum.

In September, the terminal, which has the highest number of buses, recorded 384, 176 passengers but suffered a setback in October for obvious reasons that lowered its performance to 145,629 passengers, less than half of its September feat.

There is confidence that the traffic will certainly rise in December because of the holiday season, enhance security and economic boost of vacationers and tourists.