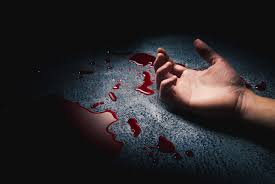 The 23-year old son, Michael Okhide was said to have run away after stabbing his parents who bled to death yesterday, Tuesday, February 4, 2020.

The incident happened at Alhaji Akeem Gbadamosi Street, Ejigbo, Lagos, where they resided.

It was gathered that the Late Mrs. Okhide was one of the matrons at Isolo General Hospital. She had three children for her husband.

Michael, the second child of the family, who was said to have been suffering mental problem before the incident that led to the murder of his parents, also attempted to kill his sister, Mary by stabbing her as well.

Although the cause of his action is yet to be ascertained, the residents who spoke with ECHONEWS said there might be an argument between the family and the suspect which might have angered and triggered him to have murdered his parents and attempted to kill his elder sister.

According to the residents, Michael had attended three private universities with nothing to show for it, adding that he was expelled and was doing nothing but only engaging in drugs.

It was gathered that the parents had done so many things to engage him to be useful to no avail before he eventually attacked and murdered them in cold blood.

When ECHONEWS visited the residence where the incident happened, it was learnt that the police had sealed off the house pending when they would conclude their investigations on the matter.

Meanwhile it was gathered that the suspect has ran away while the Police have started manhunt for him over the murder of his parents.

According to the residents, after he had killed them he escaped wearing a boxer pant to an unknown place.