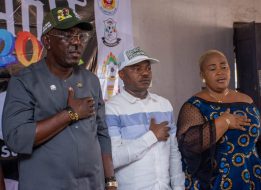 The first edition of the Maracana Soccer Fiesta has been scheduled to hold between the 6th and 9th of December 2022 in Ajegunle, Lagos State.

The Football Tournament which is put together and sponsored by the Local Government Chairman of Ajeromi Ifelodun Local Government, Hon Fatai Adekunle Ayoola, has the Senior Special Adviser on Sports to the Lagos State Government, Mr. Adeboye Adeyinka(Authority) as the Local Organising Committee Chairman is mainly aimed at mobilising and uniting youths together as one, in ensuring the realisation of the APC Candidates Bola Ahmed Tinubu and Babajide Sanwoolu as winners of next year Presidential and Governorship Elections respectively.

In a Press Conference heralding the kick off of the prestigious tournament, the Local Organising Committee(LOC) Chairman, Adeboye Adeyinka announced that the competition has been put into three categories, namely, Eleven-A-side, Seven-A-Side, and the Under-15.

The Experienced Sports Administrator continued “For the Eleven-A-side Category, Six teams have been placed in two groups after the draw on Thursday Morning. Remo Stars, Ajegunle United and Smart City FC will play in Group A, while Kwara United FC, Eagle Wings FC and Nath Boys FC will battle it in Group B.

“In the Seven-A-Side Category, AJ Flames, Shekinah FC, Royal Submarines and Team SAO FC will play in Group A, while Super Angels, Chekas United FC, Samsetoma FA & Ajegunle United FC are all placed in Group B.

Some of the members of the Local Organising Committee (LOC) who were present at the event includes the Secretary of the LOC, Mr. Olakunle Fashola, The Vice-chairman of Ajeromi Ifelodun Local Government, Hon. Lucky Uduikhue, who represented the Chairman, Hon. Ayoola Adekunle Fatai, The Special Adviser to the Local Government Chairman On Youths and Sports, Hon Adeyemi Samuel, Head Of Media of the tournament, Oluchi Tobex Tobe-Chukwu , Director General of Sports Ajeromi Ifelodun Local Govt McAnthony Anaelechukwu and many others.

The Ceremonial flag off the Competition will take place at the Maracana Football Pitch/Nathaniel Idowu Sports Complex, Ajegunle, on the 6th of December 2022.