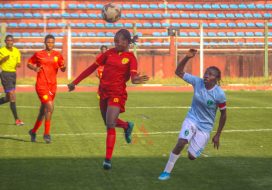 Nasarawa Amazons FC began the new NWFL season on a positive note at their adopted home in Makurdi.

Despite dominating for a large spell of the first half, the Amazons were unable to break the defense line of Edo Queens but on the stroke of half time young and vibrant attacker, Ayatsea Hembafan popped up with the winner after connecting to a well placed cross from Tarnum Dooshima pass.

Chukwu Uchenna who was in goal for the Amazons was called into action on multiple occasions by Edo Queens but the goal tender was able to deny the visitors from scoring.

The Amazons will next be away to FC Robo of Lagos in one of the match day two games slatted to hold in the 7th of December 2022.