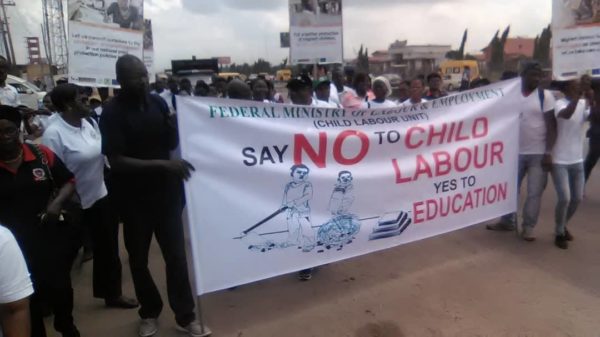 In commemoration of the World Child Labour Day yearly celebrated to protest against using children for work that deprives them of right to education, mental, physical and psychological development, the Federal Ministry of Labour and Employment, Child Labour Unit in conjunction with other agencies have organized a day awareness and symposium outreach in Oshodi on the hazards of child labour.

In a chat with Echonews correspondent, the State Controller of Federal Ministry of Labour and Employment, Mr. Nnamdi Enuoha spoke on the re-inauguration of Lagos state steering committee as a rebranded one under his auspices with the backup of  Agencies like National Agency for Prohibition of Traffic in Person (NAPTIP), National Orientation Agency (NOA), Civil Defence, Lagos State Ministry of Education and Justice in creating effective awareness to achieve success in taking children off the streets as well as trafficking to have a sound education.

Earlier, the group had took a walk round Oshodi market creating awareness and sensitizing people about injurious and hazardous effects of child labour, abuse, traffic on the development of the child.

Messages were conveyed in English, Igbo, Yoruba, Hausa and Pidgin languages while flying placards to drive home information to their target audience.

At the symposium, feedbacks from the outreach were discussed as corrective measures were proffered.

The market outreach was well participated by agencies and also captured the attraction of the audience in diverse languages.