An aspirant jostling for the seat of Oshodi-Isolo Constituency I at the Lagos State House of Assembly, Hon. Otunba Stephen Olukayode  Ogundipe has embarked on massive sensitization rally on Permanent Voter’s Card (PVC) registration and collection in his constituency.

The campaign convener addressed the mammoth on the need to obtain a PVC which is the only viable democratic instrument for the election of good representatives at all levels of government in the country.

He admonished them to brace up their lapses as the exercise would soon come to an end.

The senior Special Assistant to Governor Akinwunmi Ambode on Civil Engagement, Hon. Taiwo Ayedun (Shanna), charged Oshodi people to get involved in the process of ensuring continuity of good governance . 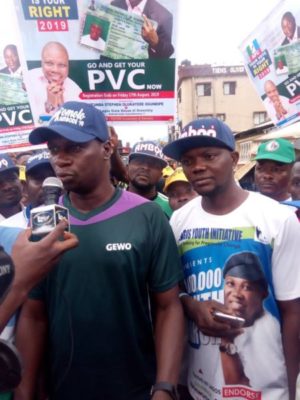 SSA, Ayedun speaking at the rally

In the same vein, the Oshodi-Isolo Vice Chairman, Hon. Daisi Oso, implored the masses not to see the rally as a mere political jamboree but a call to reawaken their consciousness to register and obtain their PVC.

He reiterated that INEC statistics has it that over thirty thousand PVCs are yet to be collected, which he summed up to be voluntary disenfranchisement from election process.

The Executive Chairman of Oshodi Isolo LGA, Hon. Bolaji Muse+Ariyoh caped it up by commending the effort of Ogundipe for pulling crowd in mass to fulfill their civic obligation which has been the major concern of party leaders both at federal and state levels.

The campaign exercise would be a continuous one, pending the time INEC closes the registration exercise.