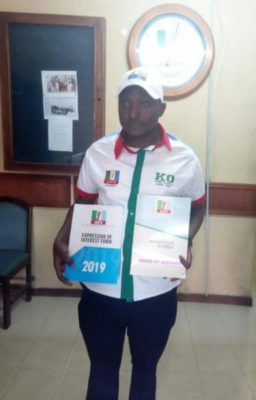 A former Speaker of the Lagos State Polytechnic (LASPOTECH) Students’ Union Government, Kehinde Olofintuyi, has declared his intention to run for the Lagos State House of Assembly to represent Oshodi-Isolo Constituency II.

Olofintuyi revealed this during a courtesy visit to the Leader of Ejigbo Local Council Development Area (LCDA), Barr. Gani Bello, and his legislative members.

Olofintuyi, during the visit, stated that his ambition was to ginger other youths to take active part in politics, saying they have so much to add to the economy.

He also charged them to be technologically savvy and upgrade their knowledge in the Internet space.

He noted that his organization involving in web development and marketing as well as youth development recently launched a youth empowerment scheme to train youths on the use of software skills that are needed in any working environment.

He added that this scheme would empower them career-wise in redefining the ways in which they can function professionally.

Olofintuyi, a seasoned web developer and digital marketing expert, who currently heads a board of five companies and few NGOs, promised to save spaces for youths in the political arena, ensure matters within his jurisdiction regarding the oversight function of constituency projects are carried out and support the party’s leadership at large.

He also emphasized his tagline ‘HEY’ which stands for Health, Education and Youth Empowerment.

He added that the International Youth Day should serve as an awareness and orientation initiative for the youths to develop themselves and the country.

He implored the youths to get their hands busy and be pro-active and reasonable in their discharge of duties at their youthful ages.

He said that the youths could be strengthened by the government by ensuring flexible policies to those striving to make ends meet.

Meanwhile, the Council Leader eulogized the aspirant, describing him as an experienced young man who possessed a vast amount of legislative experience and exposure due to his servitude as a Speaker of the LASPOTECH Student Union Government, his frequent visits to the plenary session of the House of Assembly and his National Youth Service Corps (NYSC) time at the National Assembly, Abuja.

Olofintuyi’s visit was saluted by Bello who stated that it was a delight seeing youths participating in elections and contesting for key positions in the country.

He appreciated the aspirant for honouring the invitation and prayed that the sky would be his limit.