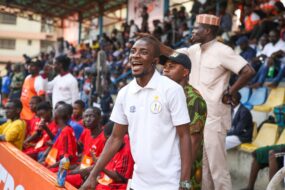 As Lagos based clubs gear up to trade tackles in the Lagos FA Cup, Ghetto Tigers chief coach, Azeez Mustapha, has expressed the readiness of the team to participate in the football competition believed to be the biggest in Lagos.

The tactician revealed that the expectation on the team is high but they will do everything possible to advance to the next stage of the competition.

He added that it is a dream come true for him to participate in the Lagos FA Cup because of the fairy tales he heard about the competition when he was much younger.

“The Lagos FA Cup is the biggest cup competition in the state and any team in Lagos will always be aspiring to play in the tournament. Since the club was founded in 2018, playing in the FA Cup has always been in our 3-year plan and we are relieved that we have been able to tick that part of our plan.

“Being a young team is an asset and not a liability. My boys may be young and referred to as rookies but they are ready to give the big sides a run for their money. We have been paired against a very oiled side and we know that we have to be at our very best to get the desired result. As the first-ever contingent of Odi Olowo/Ojuwoye local council, we know the burden of expectation on our necks are high and we are going to do everything humanly possible to progress to the next round.

“As a Lagosian, I have heard tales of the legendary days of the first generation club from my football enthusiastic father. It is a dream come true for me, to finally be making my debut in the prestigious Lagos FA Cup which is the highest cup competition in the State.

“Our boys will use this experience to dominate the world in the nearest future. We hope to become a league side in 5 years and consistently test our progress in the Lagos State FA Cup. In all, the young players are the major of the club’s policy.”