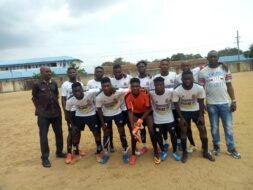 The much anticipated match ended up in a penalty shootout as both teams played out a barren draw in 90 minutes of play.

The goalkeeper of Satech FC was in an inspirational form as he pulled up great saves in the encounter numerous times to deny Divine FC.

Divine FC dominated proceedings in the first 45 minutes as they switched passes together in search of a goal in the encounter.

Both teams displayed great attacking threats but could not convert their chances in the first half as it ended goalless.

The goalie of Satech FC was the major talking point of the match as he pulled up fantastic saves numerous times to deny Divine FC in the game.

Relishing the atmosphere, both teams tried to get a goal in the encounter and prevent the match from entering the penalty shootout stage.

The match lived up to its expectations as both teams failed to get the ball at the back of the net in 90 minutes.

Divine FC won through the penalty shootout after Satech FC goalkeeper failed to convert his spot kick as he hit the crossbar with a powerful shot.