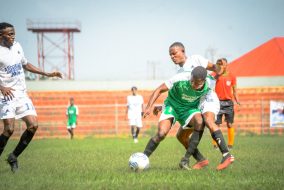 The third edition of the Otunba Isiaka Adetunji Adeleke Memorial Football Championship kicked off in grand style at the Osogbo City Stadium, as Olorunda Utd , Osun State F.A team and Orolu Utd all recorded victories on Matchday one.

The Memorial Football Championship is dedicated in honour of the first Civilian Governor of Osun State, Otunba Isiaka Adetunji Adeleke and solely powered by Rep. Bamidele Salam, who represents the good people of Ede North, Ede South, Egbedore and Ejigbo Federal Constituency of Osun State in the National Assembly.

The ceremonial kick off that heralded the commencement of the tournament was performed by the Secretary To The State Government Of Osun State, Alhaji Teslim Igbalaye, who was ably represented by PDP’s Candidate for Irepodun/Olorunda/Osogbo/Orolu Federal Constituency, Alhaji Adewale Maruf Adebayo

Football fans trooped out in their thousands from all parts of Osun State to witness Osun F.A team defeat their counterpart Ife East Area Office 4-3 via penalties after the match ended goalless in normal time.

Sadiq Alabi’s lone strike in the 29th minute, separated two familiar foes, Osogbo United and Olorunda Utd, giving the latter an important win to cruise into the round of 16.

In the last game of the day, Orolu United recorded a comprehensive 3-1 victory over neighbors Irepodun United. Fatoki Morakinyo opened scoring in the 15th Minute, before Adekunle Sakiru equalized for the Orolu team in the 36th minute. Gafar Mumeen added a double (brace) in the 52nd minute and 73rd minute to wrap up the game.

In his opening speech, the initiator of the yearly Memorial Football Championship, Rep. Bamidele Salam, who was represented by his Senior Legislative Aid (SLA) Barrister Akintayo Jimoh tasked the participating teams to imbibe the spirit of Sportsmanship all through the competition and thanked his Boss, Bamidele Salam for the initiative, which is primarily to honour the late Governor of Osun State, Otunba Isiaka Adetunji Adeleke (Serubawon) and also give the youths a golden opportunity to harness and discover their talents through Football.

The Competition will continue on Tuesday at the Ada Commercial Grammar School, Boripe Local Government, where Ifelodun FC, Ikirun will battle it out with Otin Babes FC by 10am, Boripe Utd FC and Boluwaduro Utd FC will play by 12pm, while the last game by 2pm , will see Ila United FC play against Ifedayo Utd, Oke-Ila.

The Isiaka Adetunji Adeleke Memorial Cup Competition was initiated by Honourable Bamidele Salam in the year 2020, to immortalize the selfless, philanthropic service of the first civilian Governor of Osun State, who was a former Senator of the Federal Republic of Nigeria and an astute Politician when he was alive.

The third edition of the Competition has being expanded to involve selected Football Clubs from the 30 Local Governments in Osun State and the Ife East Area Office.