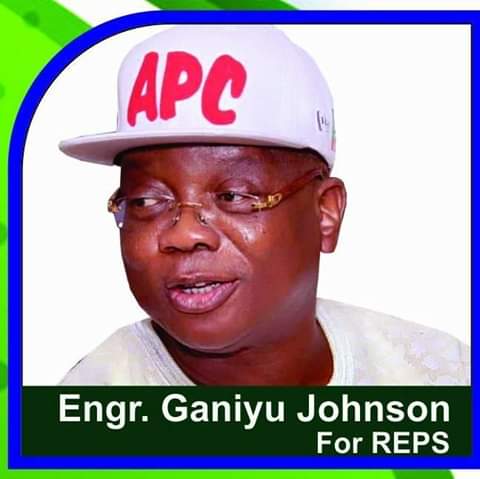 The three-man National and State Assemblies Elections Petitions Tribunal for Lagos State chaired my Justice (Mrs) E. I. Ikponwonba will, on Wednesday May 22, 2019 begin hearing the petition filed by the People’s Democratic Party (PDP) against the election of All Progressives Congress (APC) and its candidate, Hon. Ganiyu Johnson.

Engr. Johnson was declared the winner of the recently concluded Federal House of Representatives election in Oshodi-Isolo Constituency II having complied with the provision of the constitution.

But the PDP and its candidate, Emmanuel Nnodim are challenging his victory on four main grounds:

The PDP then urged the court the court to cancel the results of the election and declare the first petitioner as the winner and also direct INEC to conduct fresh election.

In particular, Rep. Johnson asked the Tribunal to strike out the petition because:

“The grounds of the Petition as contained in paragraph 7 are not known to the law and the petitioner (sic) have not complied with the provision of Electoral Act 2010 (as amended) to include specificity of claims and allegation of irregularities, malpractices and corrupt practices by the agents of the 1st and the 2nd respondents.

“The figures recorded were correct results of the poll Oshodi/Isolo 2 Federal Constituency election held on 23rd day of February, 2019 and the rerun held on the 9th day of March, 2019.

“In specific reply to paragraph 6 of the petition, the 1st Respondent states that the results compiled and announced in Oshodi/Isolo 2 Federal Constituency by the 2nd Respondent were genuine and correct outcome of the election which was peaceful, free and fair and in substantial compliance with the Electoral Act and guidelines and therefore cannot be set aside and that the 1st  Petitioner cannot be declared the winner of the election since he did not poll the highest number of votes cast and validly counted.”

Meanwhile, the APC/Ganiyu Johnson Lead Counsel, Kayode Ademiluyi debunked the rumour that the court has cancelled the election in some wards in Ejigbo, adding that the case was not postponed but adjourned for the third hearing.

During the court proceedings on Friday, the parties exchanged processes and issues for determination at hearing, while the court inquired on the number of witnesses to be called, the number of exhibits to be tendered, how long the counsels wanted the court to give them to examine and cross examine their witnesses.

It was said that after close of hearing, the matter would be adjourned for adoption of final written address and then the judgment.

It would be recalled that Hon. Ganiyu Johnson had been earlier declared the winner of the election held on February 23, 2019 with total votes of 19,426.

However, due to some perceived irregularities that marred the election at some polling units, there was rerun election to the Federal Houses of Representatives in 20 polling units and 28 polling units in Oshodi-Isolo constituencies I and II respectively that went simultaneously with the governorship and state house of assembly elections on Saturday, March 9, 2019.

Ganiyu Johnson of APC, Oshodi-Isolo Constituency II, who earlier scored 19,426 votes to beat his PDP challenger, Hon. Emmanuel Nnodim with 15,872 votes, finally coasted home to victory after the announcement of the rerun results.
With the rerun election, Johnson got total votes of 21,484, while Nnodim eventually got 16,817 votes.