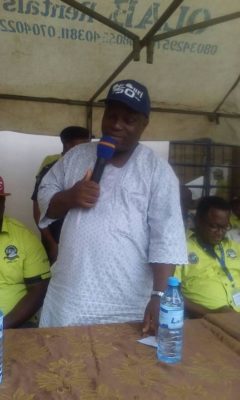 As part of effort to make learning conducive and to tame the wing of child labour in Ejigbo, the Chairman, Ejigbo Local Council Development Area (LCDA), Hon. Monsurudeen Oloyede Bello Obe, has declared compulsory free education with free meal and a uniform per pupil in all the primary schools in Ejigbo.

Bello, who noticed that poverty had pushed some parents to deny their children education at tender ages by subjecting them to various hard labours to fetch money, said with the implementation of the initiative, there would be no excuses for any parent to keep his or her child away from school.

He said that the local authority would make a new law banning every child of under age and even above 18 years from hawking or engaging in any business activity in the open market.

Bello, who made the promise at Ejigbo Model Primary School during a programme in commemoration of 2018 UN World Day Against Child Labour, organized by a community based organizations, The Legends, said the local council deemed it fit to replicate the federal government initiative at the local level.

He said a stakeholder meeting would be organized with the parents to fine-tune the modalities for the execution of the initiative as government would have zero tolerance on child labour henceforth.

He therefore appealed to the parents and other concerned bodies to key into the programme which is expected to take off in the 2019 academic session.