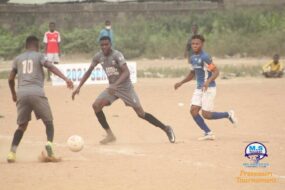 Kingsley Chibueze of Ms Success FC grabbed both goals in the encounter, scoring the 1st goal in the 32nd minute and wrapping up the win for his side from the penalty spot in the 56th minute.

AbdulSalam Toheeb pulled a goal back for Collins Edwin FC in the 88th minute.

Ms Success FC dominated the encounter in the first 45 minutes and ascertained their presence playing on their home ground.

Kingsley Chibueze opened the scoring from a counter attacking move which left Collins Edwin FC open at the back as Chibueze displayed his finishing technique by scoring from close range.

Collins Edwin FC trailed by a lone goal at the end of the first half but showed promising display to outclass their opponent.

Ms Success FC secured a penalty in the 56th minute which Kingsley Chibueze converted successfully to give his side a two-goal lead.

Collins Edwin FC woke up from their slumber and started pressuring their opponent defense who stood gallant to prevent any blushe.

Ms Success FC goalie was called into action by making a great save to deny Collins Edwin FC in the 81st minute.

AbdulSalam Toheeb pulled a goal back for Collins Edwin FC in the 88th minute to set up a tense final moments of the match.

Exciting young talented playmaker of Ms Success FC was awarded the man of the match with his impressive eye catching display.