The proposed budget is N600 million higher than the budget of the previous year.

While presenting the budget tagged ‘Budget of Consolidation’, the council boss said the budget seeks to consolidate the developmental strides achieved in the previous year.

Highlighting the projects to be executed with the budget, Olaleye said: “In our plan for 2020, we have identified critical roads in the local council area for construction and reconstruction.

“As we did in the preceding year, we have a minimum of one road per ward and some of those roads include Baale and Araromi Streets in Ilasamaja; Baale and Adebajo Close in Ishagatedo. 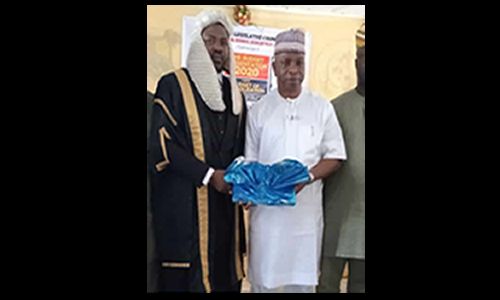 “Others are Hakeem Dosunmu in Apena while a total of five roads are expected to be constructed in Okota. They include Sumbo Adejoke, Hakeem Onitiri, Aremu and Seke Abimbola.”

“For Akinbaiye ward, we have listed the gigantic Moshalashi Street and for Ajao Estate Ward, we have equally listed many of the roads there for rehabilitation.”

Aside road projects, construction of a brand new primary school at Okota as well as a new primary health centre at Alagbeji ward were listed in the budget.

Also, the building of an event centre within the council premises has been listed in the budget.

When completed, the event centre is expected to serve as another revenue generation source for the council.

The council boss also revealed that to compliment the recent construction and reconstruction works within the council, an upgrade of offices with modern equipment is also a priority in the new fiscal year.

Olaleye therefore sought the co-operation of the Legislative Arm in ensuring quick passage of the budget proposal so that work could begin in earnest.

The Leader of the House, Hon. Remmy Shittu Remmy therefore assured the executive chairman of timely scrutiny and speedy passage of the budget.