They described their optimism towards their preferred candidate as a result of the mind-blowing projects he has facilitated before and after he was a political office holder.

The National Chairperson of COMWA, Mrs Rashidah Adebari while enamouring the philosophy and candidature of Asiwaju disclosed that BAT has been a successful leader that was able to manage a multinational company and elevate the status of Lagos State as a competitor with African countries which is beyond interstate competition.

She said the pace Asiwaju had long set is the track succeeding Governors have continued to tread which shows his insightful ability to manage Nigeria when elected and beyond.

The Supervisor for Women Affairs and Poverty
Alleviation, Iba LCDA, Hon. Moriamo Salawu while backing Adebari’s disposition urged Badagry residents to be visionary by electing all APC flag bearers in the division as their vote would bring about the positioning of candidates of like minds that would support the mission and vision of Asiwaju in developing the country.

Salawu emphatically solicited the election of the APC flag bearer representing Lagos West, Hon. Idiat Adebule notes that she is a revolutionist that is capable of developing the community at any political office she is functioning.

She urged residents to be compliant with Asiwaju’s aspirations and ideas by collecting their Permanent Voters Card (PVC) and confirming their polling units after collection.

She further prayed for the nation to enjoy the fruit of electing Asiwaju and other APC candidates after the election. 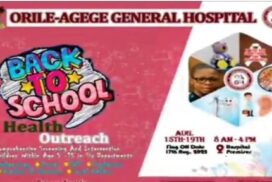