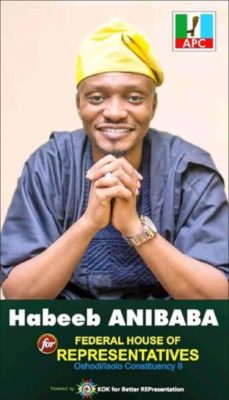 The aspirant for Oshodi-Isolo Constituency II seat at the Federal House of Representatives, Hon. Habeeb Anibaba, has petitioned the National working Committee (NWC) of the party on the gross misconducts that engulfed the whole exercise in Ejigbo and Isolo, asking the committee to declare the exercise void.

The aspirant complained that the primary election was marred by irregularities, corrupt practices and non-compliance with the provision of the electoral Act.

in the petition made available to Echonews, the aggrieved contestant accused the Itesiwaju factional group of the party in Ejogbo led by the Lagos State Commissioner for Home Affairs, Hon. Abdulhakeem Abdullateef of disrupting the exercise.

At Ejigbo polling centre, c was alleged to have taken up the job of the representatives of the NWC, who were supposed to be the umpire in the election by head counting members of his group without party membership cards in favour of his (Abdullateef’s) candidate, Hon. Ganiu Johson.

Anibaba said the Commissioner had committed two offences of violating the directive of the NWC and also taken up the function of the umpire.

He maintained that the action of the commissioner had disrupted the whole exercise as his own members were excluded from the exercise.

Anibaba alleged that similar scenario occurred in Isolo especially at Ishaga ward where one of the contestants, Akeem Muniru, was said to have mobilized people without cards to vote for him.

It was reported that election did not hold at Akinbaye/Alagbeji and Okota/Apena wards, while results were fabricated in some other wards.

The petitioner however pleaded the NWC not to declare any of the other contestants as the winner of the primary election of the All Progressive Congress (APC) candidate for the Federal House of Representatives, Oshodi-Isolo constituency II.

Meanwhile, Anibaba commended the representatives of NWC who were posted to Ejigbo for who dissociated themselves from the exercise having witnessed misconducts.

He also commended the Lagos State Commissioner for Information and Strategy, Hon. Kehinde Bamigbetan, who rushed to the venue, calmed the angry members and told them that the situation would be controlled by the NWC.