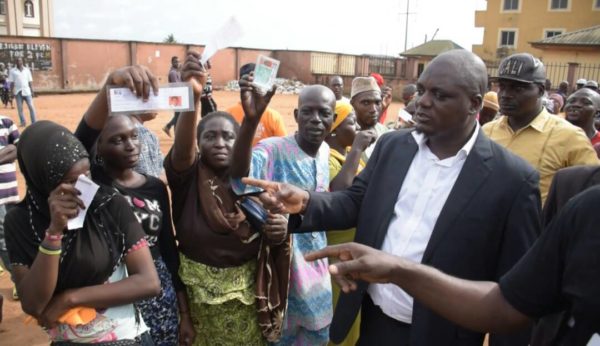 The All Progressive Congress (APC) primary election, which was supposed to be held peacefully today, was allegedly  disrupted by the Itesiwaju factional group of the party led by the Lagos State Commissioner for Home Affairs, Hon. Abdulhakeem Abdullateef in Ejigbo.

our correspondent, who monitored the exercise in Ejigbo and Isolo reported that the party members had arrived at their various polling centres since 8am, waiting for representatives of party’s National Working committee (NWC), who were supposed to oversee the electoral process.

Before the arrival of the election umpire at the Ejigbo centre, the commissioner had come to the venue, mobilising people for his candidate, Engr. Ganiu Johnson, the former Commissioner for Works, one of the major contenders.

When the umpires arrived at about 3:30pm, they gave the directive from the NWC that only cards should be used. There was initially disagreement among the followers of the contenders, especially Johnson and Hon. Habeeb Anibaba on the issue of using only party’s card for voting but not slip.

After all the concerned parties had agreed on the use of cards only as the directives from the NWC, the Commissioner, Abdullateef, took up the job of the umpire to head count his people with both cards and slips as against the directive of the party authority despite the insistence by the NWC that slips should not be used, while the followers of Anibaba with valid cards were excluded from the exercise.

Having learnt about the scenario, the Lagos State Commissioner for Information and Strategy, Hon. Kehinde Bamigbetan, rushed to the venue, calmed the angry members, assuring them that the situation would be taken care off by the NWC.

On arrival of the Bamigbetan, the Commissioner for Home Affairs, Abdullateef disappeared from the scene.

Similar scenario was recorded at the various wards in Isolo as election did not hold at Akinbaye/Alagbeji Ward, Okota/Apena Ward, while the results were fabricated to suit other contender.

At Ishaga ward, similar development erupted as one of the contestants, Hakeem Muniru, was said to have mobilized people with slips to vote, defying the NWC directive. The election was said to be inclusive.

At Ejigbo, the INEC officials dissociated self from the exercise, maintaining that there was no result to be recorded.