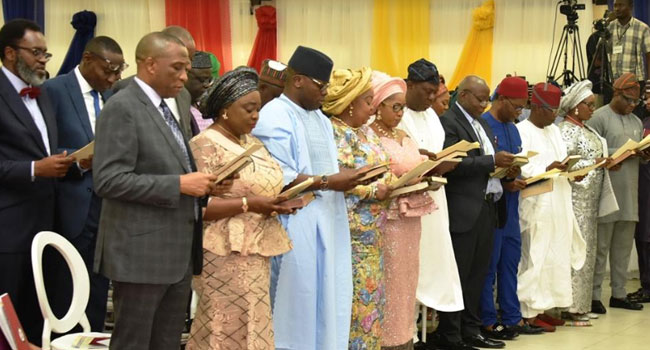 The Governor also directed appointees seeking to be among delegates for political parties’ primaries for elective offices in 2023, to tender their resignation letters to the
Secretary to the State Government (SSG).

Governor Sanwo-Olu’s directives were contained in a circular issued by the Head of Service, Hakeem Muri-Okunola.

The e-document with Ref No: CIR/HOS/’22/Vol.1/017 stated that the Governor’s directive complied with the Electoral Act 2022.

It would be recalled that Section 84 (12) of the Electoral Act 2022, signed by President Muhammadu Buhari, provides that political appointees aspiring to contest elections must resign their positions before the conduct of political party primaries.

“No political appointees at any level shall be a voting delegate or be voted for at the Convention or Congress of any political party for the nomination of candidates for any election,” the section states.

It was gathered that barring any last minutes change of mind, some Governor Sanwo-Olu’s aides will tender their resignation latests this week to pursue their political ambitions.

While some have already declared their intentions to run for House of Representatives and Lagos State House of Assembly seats, some appointees are aspiring to run for political offices or serve as delegates during the All Progressives Congress (APC) primary elections.

It is not clear whether more members of the cabinet would join the race this week.

So far, at least four of the cabinet members have declared their intentions to contest.

Fayinka, Oyerinde and Ajayi are contesting for House of Representatives seats in Mushin II, Amuwo-Odofin and Ibeju-Lekki Federal Constituencies respectively while Bonu is contesting for Badagry I State Constituency.

Last week, Fayinka was at a Ramadan lecture and prayer organised in his honour soliciting the support of his constituents to win both party’s primary and general election.