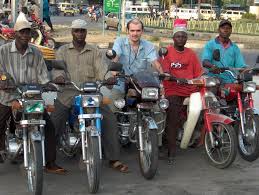 Although many see it as a dirty job especially the graduates, an average commercial motorcycle driver popularly known as Okada rider makes about N5000 on daily basis working within Isolo community.

Apart from the dues paid to the local government and the ones collected by the urchins called agbero at various bus stops, bike operators plying Isolo metropolis said that they between N3000 and N5000 on daily basis.

According to some of them who spoke to our correspondent, they have to pay N100 for a ticket from the local government, while the agberos collect N500 from them twice a day for them to operate for the day.

They explained that aside the money paid, they make between N5000 and N3000 depending on the ability of an operator to work through the day. They added that the amount made also depend on the type of the motorcycle as new motorcycles would fetch more money than the rickety ones.

Akeem Salako, one of the riders explained that the a new bikes can work without any hitch while the rickety ones could develop various faults thereby hindering one from making good money.

He said, “Apart from that, the rickety bike consumes more fuel than the new one. For instance, you can buy not more than N500 to N700 fuel for a new bike a day but for the old bike, you may buy more than N1500 before afternoon.”

Although majority of the operators are uneducated including the Hausa indigenes, there are some educated, in fact, graduates earning their livings from okada riding.

Babalola Raji, a polytechnic graduate, who also rides okada for a living in Isolo told Echonews that he ventured into Okada riding when he could not get white-collar job after graduating from school for about three years.

According to him, he was introduced to the job by a friend in 2016 when he found it difficult to make ends meet. He disclosed that he was given a bike to deliver N100 to the owner on daily basis.

He said after some months, he was able to buy his own bike from his savings apart from catering for his wife and a child.

Rajis said he presently controls two bikes which he gave to some people who deliver to him on daily basis in addition to the one he rides himself.

Enumerating the challenges, he said riding okada is not a good thing though, he believed that the best is for one to quit and venture into another business after making some money.

He said he was also planning to quit riding okada for a living, knowing well that he could do well in another business if he eventually decides to take up a new challenge.

However, he said he has not decided on the business to embark upon and that is why he is still riding despite having another two bikes from which he takes daily delivers, adding that he is doing his feasibility study of some businesses.