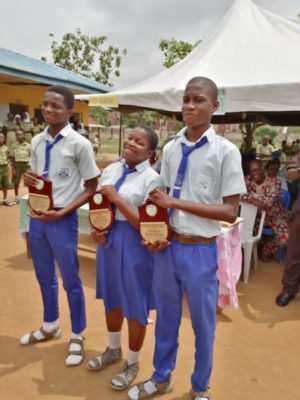 As a way of honouring excellence, and to motivate the students for better academic performance the Principal of Oke-Afa Junior School, Mrs. Owolabi in partnership with the immediate past Principal, Mrs. Omotunde Young has feted the students with distinctions in the JSS final examination with monetary gifts.

Mrs. Young, who is now the Oke-Afa Senior College Principal, in her explanation of the Prize giving event, said that in September 2017 when she was transferred from Unity Junior High School, Oshodi to the school, the performance of the students then was very poor so in a way of helping the situation, she and her team started early morning lessons from 7am – 8am and afternoon 2:30pm-3:30pm voluntarily for the students free of charge, which according to her was done three time a week.

And as the last Basic Education Certificate Exams (BECE) approaches she announced to the students on the assembly in morning that anyone who scored 7As in the exams would be given the sum of ten thousand naira (N10,000).

Mrs. Young, who has now been transferred to the Senior School, in a way of keeping to her promise, said she then worked with the present Principal of the school to honour the students who met up with the target of 7As.

According to young, “One morning, I just challenged the students on the assembly that if any of them scored 7As he/she would have N10,000 and they all shouted. But one of the students, Declan Fortune came to me in the office after the assembly and asked if I meant what I said. As I reaffirmed to him, he left and one of the teachers whispered to my ear to watch out for the boy. And the boy came out and outshot the target, he scored 8As in the exams while his twin sister Declan Favour came second with 7As and their friend Nwankwo Christopher with 7As as well.”

The honoured students however shares their gratitude and motivation towards the exams, saying big thanks to the Principals, the teachers for the honour and sharing what effort they’ve also put in to achieve the feat.

Speaking, the overall Best student, Declan Fortune, confirmed the Principal’s narration, saying he got motivated and determined to get prize with serious reading and prayer.