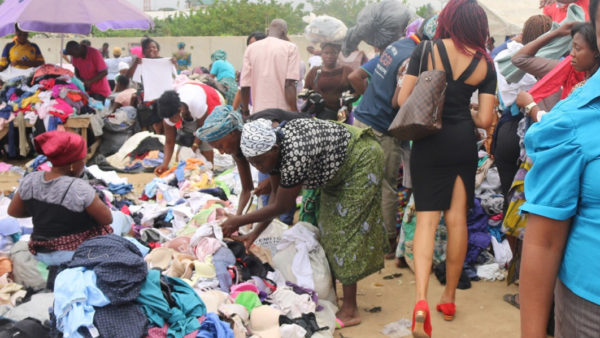 The traders at the popular Answani Market in Isolo have persistently lamented over alleged extortion by the market leaders and some other influential people in the community.
For instance, on every market day, which has been slated for every Tuesday of the week, the traders said they must pay not less than N1,000 to different bodies who claim shareholding of the market. This is apart from the charges they have to pay on daily bisis.
According to some traders who spoke to Echonews on the basis of anonymity, apart from the local council charges, the market association charges, the Iyaloja charges and a host of other charges, they have to pay to someone who
The charge as they said is called Owo Omooba (the royal charges), which the traders see aa mere extortion as they claimed that they do not know the prince in person.
“We pay market dues everyday. Different sections of people come around to collect money from us. The people that collect money in Mondays are different from those that come on Tuesday which is the main market day, and so on. The amount varies, though, during festive season, we pay higher. Moreover, the location of your market store determines the amount of money you pay, as well, that’s one reason why the money varies.
“And if you don’t pay, they will seize your wares and would have to bail it with exorbitant money. Some of us have abandoned our wares with the executives of the market because we could not pay the amount, they request to bail the wares,” they lamented.
However, a spokesperson of Iyaloja who does not want his name in print maintained that the charges are normal, claiming that such are paid in all other markets across the state.
“The series of dues traders pay here is a common market custom. Itis done in all markets so, I don’t know why people are complaining about it at this time. the custom is as old as the market itself, not only Aswani but other market in the state.”
He said he was not aware of any prince collecting money from the traders.