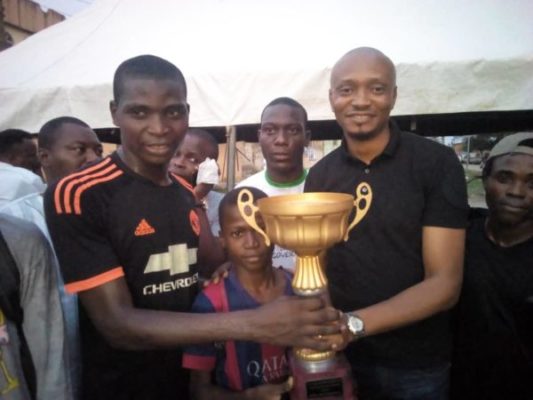 A brace from Yusuf Adetunji has confirmed Flamings Football Team as winner of the 2019 APC Gold Cup tagged “Play for Sanwo-Olu” organised to rally support for the candidates of All Progressives Congress (APC) across the state held at Jakande Estate, Oke Afa Ejigbo Lagos.

Flamings rode past their opposition, Peace Center Football Team by two goals to one in the thrilling game with Adetunji, top scorer of the competition with two goals to steal the show.

For two consecutive times in the competition, the emerged Champions had to come from behind to win the game, having trailed to Taofeeq Ojo’s opener for Peace Center who led at half-time.

However, Flamings showed their resilience to power a comeback through substitute, Adetunji, who was announced as the most valuable player in the competition with two goals to put his team in front.

Several attempts were made by the Flamings team to draw level in the game, but the indefatigable display of the winners was enough to ensure they embark on rapturous scenes in clinching the 8-team trophy tournament at the maiden edition of the competition.

The football tournament was convened by the Idera Support Group in Jakande Estate to give support to the Lagos State APC gubernatorial candidate, Babatunde Sanwo-Olu as well as to engage youths in sports, providing opportunity for them to showcase their soccer dexterity.

Presenting the trophy to the winners, the patron of the Idera Support Group, Hon. Habeeb Anibaba, former All Progressives Congress (APC) House of Representatives aspirant, Oshodi-Isolo Constituency II, expressed his pleasure on the event, disclosing that it was organized not only for the support of the All Progressive Congress candidate but also for the youths to feel the government’s plan to carry them along as well as to develop soccer stars in the constituency.

Anibaba however urged the youths in the community to continue taking part in sports activities as a way of ensuring developments in the life of a youth.

He also informed that there are more soccer competitions coming up in the community.