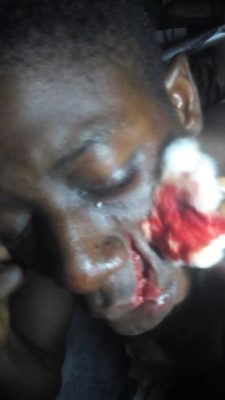 The police is on the search for an alleged notorious boy, Wasiu who is known Sebi Nse who is enlisted in the black book of Okota police station for allegedly cutting a roommate lips with a cutlass for wanting to pack out.
The victim was said to have accommodation problem because of issues he had with his senior brother who he was staying with,this led to his relocation to the accused house in Fatade street, Ishagatedo Isolo LCDA as a room mate.
Shortly after, the victim reconciled with his senior brother and set to move in back with him.upon hearing this, Wasiu refused to let him go,he started beating the boy as he was packing his belongings.
Consequently, Wasiu cut the upper lip of his roommate with a cutlass leaving a deep cut from the nose to the lip side.
He resulted to this when he found out that the room mate was adamant about packing from his house to reunite with his brother.
Wasiu has been long fled since he noticed that the police has been involved in the case and has also declared him as a wanted person.
Echonews gathered that Okota Police station and Child Protection Network (CPN) are in their best interest of using their good office to apprehend Wasiu and give justice to the victim.