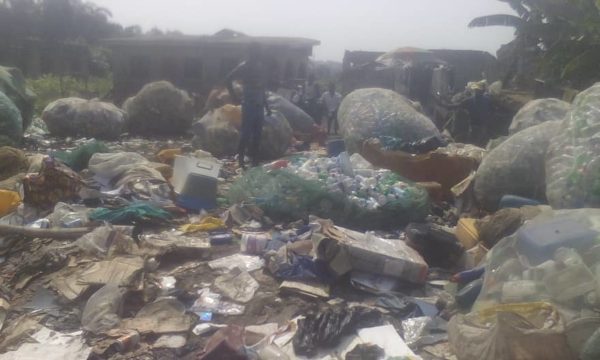 An army of over 200 cart pushers and scavengers separating waste to sell have turned the end of Otenaike Street, Ejigbo into massive dumpsite causing the residents to panic over their safety from what seems an imminent epidemic.

The site has also blocked the canal linking Ejigbo with Idimu raising fears of heavy flooding when next rain falls.

The residents are worried that the mostly non-indigenous community of scavengers who moved in gradually five years ago pose both physical and environmental threat and urging the state and local government to evacuate them and cart away the refuse.

Speaking with Echonews, the Head of Security in the area, Elder Akinde David, stated that the alleged offenders turned the vicinity into residence without the knowledge of the people in the area.

“It has been happening for about ten years now. But in the last five years, the dumping has really increased.

“We discovered that they started picking used rubbers, tins and other things from that place which they claimed served as income for them. They also started residing there. We told them to leave the place after picking whatever they wanted to pick in the area, but they have refused to do so.”

David, a former Chairman of the area noted that they had tried to verify whether somebody in the community had given the truck pushers the authority for using the place as dumping point.

He said that a call has been made directly to the Divisional Police Officer in Ejigbo, CSP Olabisi Okuwobi and that they were still awaiting the police action on the issues.

Other residents have also shown concern over the hazards the situation may cause.

It was learnt that the heap of refuse has blocked the free flow of drains, causing unhealthy conditions as refuse spread on the street especially during the rainy season.

They therefore appealed to the government to enforce disciplinary actions on any individual who is caught either using the place as residence or as refuse dump.