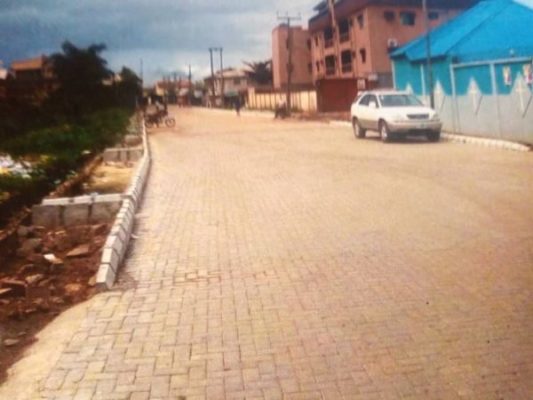 The Chairman of Okota Resident Association ORA Zone A, Alhaji Chief Abiodun Odulaja with some other residents of the community has cried out for government intervention on the deplorable condition of Bayo Onawale Street; even though, the community claimed to have spent over N22million repairing the road.

This outcry was made when Echonews correspondent paid a visit to the street and its vicinity recently.

The community which is as old as Okota itself is said to have been battling with the menace of the deplorable condition of Bayo Onawale Street; a road which serves as mother-road to 36 streets in the community.

While they could not get the government’s support, the community residents, as led by Chief Odulaja, solely took responsibility for the acclaimed N22 million that has so far been spent to interlock over 875 meters of one of the longest roads in Okota.

Recounting the experience he had about the road before and the steps taken to attract government’s intervention, Odulaja said, “Few years back the whole road was terrible, it was never an easy road to ply, everywhere was swampy. There were cases whereby people were reported to have lost their limps, motor breaking down. It was a sad experience for those walking and the vehicle drivers through Bayo Onawale.

“It was my intention when I took over office as the second official chairman of ORA that I wanted to politicize the association so that we could move ahead.

“When we started, we made a brochure, involved government and we went to virtually all the Ministries of the Lagos State Government, including the Governor’s Office, I submitted the brochure of our intention. Actually, when Fashola was there, he came, inspected the whole area, took photographs, but nothing was done afterwards. In fact, we went through his wife because she attended a church on the street nothing was done still.

“There have been successive governments which we have been dealing with but there hasn’t been any response to our request. I decided that, this time around we need to move ahead. It’s very painful that government has left us to ourselves, even after I took it upon myself visiting all government ministries after I’ve gone through the stress of preparing the brochure, myself and other executive members, it took us more than two months to cover all the ministry because we had to secure appointment to deliver whom we intended to drop the package with.

“The brochure we did comprised of all our previous activities which are the palliative measures we had put in place and the current state of the road, then. I dispersed the brochure to every government quarter in and outside Alausa and they all acknowledged it.”

Revealing how about N22million was raised to procure interlock to cover about the street, the community leader said since there was no response from the government, the community took the project upon themselves, divided it into seven phases for execution.

He explained that they have finished with the second phase which covers about 875 meters, with almost N22million raised among the residents.

“The first phase cost us more than N11million while the second phase was N7.5 million and we are starting the third phase soon and that will cost us N11.6million. Presently, we are short of funds, but preparation is in top gear to start the third phase. As soon as we get the money from our people who are landlords and tenants, we will commence work,” he concluded.

He explained further how unrealistic it was getting people to contribute money for the project even as the economic condition is unfavourable.

“Because of the disheartening experience we are all having, we took up the responsibility of this road; we taxed ourselves in order to get contribution. It’s not been easy getting money from the people, you can imagine the current economic situation which is not fair to all, it was like taking needle through an eye. We have to start inviting them to meetings upon meetings, begging them and convince them.”

“I felt so much disappointed when some communities were given grants and we were excluded, even with the fact that we all paid the compulsory Land Use Charge and other government charges, like other communities. Though, there has been effort to turn our association into CDC but that should never have stopped us from receiving the grants. Even the LCDA Chairman has not helped us in anyway. During his election, I was called to a meeting by the immediate past APC State Chairman, Chief Henry Ajomale, Engineer Ganiu Johnson and other political heavyweights in order to convince my people to vote for him because in his first term, he failed us.

“In fact, he tried to play on our intelligence back then, he wanted to claim the glory for the culvert we made. Regardless of that, we voted for him massively. It is quite unfortunate that, till this moment, he is yet to visit our community not to talk of attending to any of our community problems.”

“What we want the government to do is that, it’s either they take the project over from us or they give us grants to complete project, we still have long distance to cover. We are proud of what we’ve been able to do so far, people are commending us. Some are saying that no community has ever spent almost N22million without government intervention which we weren’t even appreciated for.

The incumbent Isolo LCDA Community Development Committee (CDC) Chairman, Alhaji Fatai Abisiga, who is a resident of the community revealed that he had been dealing with the appalling situation of the street right from 1994 but, claimed that the government is responsible for the provision of social amenities to everyone under its jurisdiction so, the issue of being a CDA or not should not have debarred ORA from enjoying some of the dividends of democracy.

He, however, revealed that the community has been planning hard to become a CDA and this will happen anytime soon.