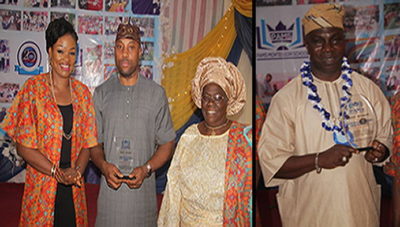 The awards, given recently during its 20th anniversary celebration at Domino centre, Mafoluku Oshodi, was said to be a way of appreciating the efforts of the Chairmen ti raise the standards of education in their various communities.

Ariyoh, who was represented by the former Executive Secretary of Oshodi Council, Dawood Olajobi, thanked the organizer of the award for the recognition of his impact on educational sector in his community, saying the award was an incentive to do more.

He however implored parents to always monitor the social and educational activities of their children and wards, noting that their actions reflect in the society and could have negative effects on the nation if not properly checked and controlled.

The LG boss also called on the youths to take active part in politics so as to be able to contribute positively to the growth of the nation.

Also reacting to the award, the Chairman, Isolo LCDA, who doubled as the special guest of honor at the occasion, Hon. Shamsudeen Olaleye commended the school director and members of the management for their efforts in complementing government on educational development at the grassroots.

He assured them that the leadership of Oshodi LG and Isolo LCDA would always be ready to partner with groups or individual with good programmes to make positive impact on lives.

The occasion was highly attended by people who have been affected

positively ranging from parents, alumni of the school and distinguished guests.