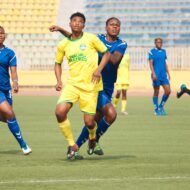 The Matchday six encounters of the ongoing Nigeria Women Football League (NWFL) Premiership hold this Wednesday across six centres in the country.

Six top flight fixtures will be played on Wednesday, the 26th of January with some regional rivalries and classic clashes on the agenda.

Group A League leaders, Edo Queens host struggling Osun Babes at the Samuel Ogbemudia Stadium, Benin, by 7pm on Wednesday. The ‘Obaseki’ Ladies still basking in the euphoria of their 1-0 away victory at the U.J Usuene Stadium, Calabar against Pelican Stars would confidently go into Wednesday’s game, aiming nothing but the three maximum points at stake. The ‘Omoluabi Queens’ gave a great fight in Benin City last season in the same fixture, with Elizabeth Zirike’s solitary goal in the 50th minute, making the only difference in the game.

Osun Babes were drawn bye last week, but won on Matchday 4 against Pelican Stars at the Lanreleke Stadium, Ile-Ogbo. Both Managers are confident heading into this encounter. Olayinka Adunola is optimistic that her side will get a favourable result in Benin, same as Wemimo Mathew, who clearly believes that her team is well prepared for this encounter.

Naija Ratels got a great result last week in Ilorin against Confluence Queens and will face a tough battle against one of the best sides in the league, Nasarawa Amazons at the Area 10 Sports Complex, Abuja.

The two teams are definitely the highest scoring sides in the league. Nasarawa Amazons have scored twelve goals and conceded just one so far, while Naija Ratels have gotten past their opponents’ goalkeepers nine times and conceded four times.

The game promises to be enthralling and no doubt, there won’t be any dull moment.

Pelican Stars seem to be the only team in the league without a point so far. They will face another struggling team, Adamawa Queens, who have only recorded three points in their last five matches. Both teams will give their all on Wednesday, no doubt, they are badly in need of points.

Adamawa Queens are a very difficult side to beat at home and they showed that quality when they defeated Confluence Queens 1-0 at the Abubakar Pantanmi Stadium on Matchday 4. Pelican Stars have also conceded more goals, than any team in the league, leaving them as the weakest side so far, but they have promised to give their all in the all important game against the ‘Fintiri’Ladies.

A Delta derby that comes with alot of talking points. Two rivals in very different veins of form renew hostilities on Wednesday. The ‘Okowa Ladies’ picked a rare draw in Lagos against FC Robo Queens to continue their unbeaten streak, while Royal Queens new manager Whyte Ogbonda sought to immediately endear himself to the Royal Queens faithfuls with a convincing win over visiting Sunshine Queens.

In the same clash last season, Mamuzo Edaife, 75th minute goal gave Delta Queens all three points and there were alot of rowdy moments after the final whistle.

This year’s fixture promises to be even more captivating.

The Nembe Township Stadium, plays host to a highly-anticipated NWFL Premiership derby on Wednesday, as Bayelsa Queens welcome Rivers Angels to Glory of all Lands.

One place and two points separates the bitter rivals in the NWFL Premiership table presently, with one manager certainly under more pressure than his counterpart this week.

This fixture is perhaps the biggest game of the week and a Bayelsa Queens win, will see them climb top of the log.

Meanwhile, the Edwin Okon’s side started the season brilliantly, recording three wins in the last four games. A win at the Nembe Township Stadium, on Wednesday looks possible for the ‘Jewels of Rivers’ looking at their present form.

One win in four games for Sunshine Queens and pressure and need to win against Abia Angels on Wednesday at the Ondo Sports Complex, Akure stirs them in the face. The ‘Betty Babes’ have only recorded three points so far this season, while their opponent on Wednesday, Abia Angels have only succeeded in claiming just two points so far.

Ann Chiejine faces Tayo Onilude in a must win clash for the two teams. Abia Angels were brilliant at home last week, holding Bayelsa Queens at the Umuahia Township Stadium to a goalless draw, while Bayelsa Queens recorded a big win in Akure on Matchday One and lost their last game to Royal Queens in Warri last week.

It promises to be an entertaining encounter with the two teams eyeing a favourable result.