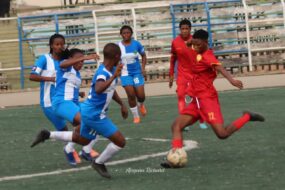 Nasarawa Amazons on Wednesday ended Edo Queens amazing 9 match unbeaten record in the league, with a crucial 2-0 victory at the Lafia City Stadium.

Before the start of Week 12 Games, a minute of silence was observed with all players wearing black armbands in honour of the late Sunshine Queens Goalkeeper, Elizabeth Johnson, who’s tragic event happened on Saturday.

Diminutive winger Chinemerem Opara scored in the 6th minute to put the Solid Babes’ ahead in the game, before in form attacking midfielder Dooshima Tarnum doubled the lead six minutes into the second half.

It was Edo Queens first defeat this season under their manager Wemimo Mathew and despite the loss in Lafia, they still remain top of Group A with 23 points, while Nasarawa Amazons trail them by two points.

Osun Babes continued with their great form in the month of march, as they earned a 2-0 victory over Pelican Stars in Calabar. The Omoluabi Queens’ took the lead in the 63rd minute, when diminutive forward Marcus Grace headed home a cross from right back, Blessing Barnabas. The away team continued to press on, until they got the opportunity to score the second late in the game through a good finish from Flamingoes captain Alvine Dahz.

In Warri, Royal Queens failed to make it three victories in three games, as they fell to a lone goal from Etim Edidiong in the 83rd minute. Edidiong received a great pass from former Osun Babes striker Kafayat Bashir to give her side an important win in the game. The victory on Wednesday ensured the Gloryland’ girls moved to the top of the Group B, with Rivers Angels trailing them by a point.

It was a goalless affair in Umuahia, as Abia Angels and Rivers Angels played out a goalless draw Infront of the expectant fans in the capital of Abia State. Abia Angels lost a couple of chances in the first half with Rivers Angels defence holding on tight, not to concede.

The draw takes Rivers Angels to second position in their group, while Abia Angels who have the highest number of draws this season (5) remain in 6th position with just 8 points.

Adamawa Queens tried so hard not to concede, but finally did in the 62nd minute, as Favour Nkwocha’ effort beat the Fintiri Ladies’ goalie to give the New Direction’ Ladies a very important win Infront of their home fans. The win took Confluence Queens to third position, just a point above Naija Ratels on the log.

The final game of Week 12 will hold on Friday at the Dipo Dina Stadium, Ijebu Ode. The game between FC Robo Queens and Sunshine Queens was postponed to honour the demise of Elizabeth Johnson.