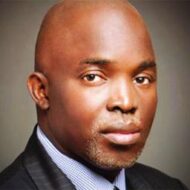 The immediate former president of the Nigeria Football Federation (NFF), Amaju Pinnick have described the presidency seat of NFF as the toughest in the world.

Speaking at the NFF AGA/Elective Congress, Amaju Pinnick described the NFF presidency as the toughest in the world and told the aspirants that he’s still their boss.

“The NFF Presidency seat is one of the toughest seats in Nigeria.

“Nigeria is a country that is deep in my heart. I want to advice the congress not to put unnecessary pressure on the person that will emerge today but support the person.”