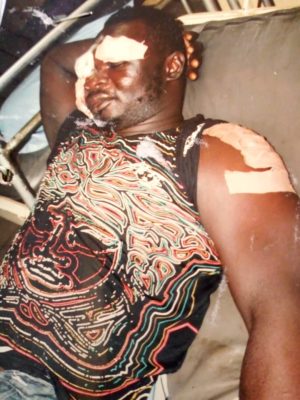 A 31-year old man identified as Abayomi Alake has been sentenced to three years imprisonment for stabbing a neighbour with broken bottle, causing him right-eye blindness and grievous body injury.

Having pronounced Abayomi guilty of a single count charge of stabbing a neighbor, Emeka Mbanugo Tochukwu, on the right eye and all over his body, an offence punishable under section 245 of the criminal law, 2015, the Presiding Magistrate of one of Isolo Magistrate courts, Hon. E. O. Teluwo, had on Monday, sentenced Abayomi to three years imprisonment.

On the account of the Prosecutor Inspector, Oje Uagbale, who narrated what lead to the ugly incident to the court, the compliant was outside his house at No. 23, Goloba Street, Isolo, alongside fellow neighbours, on the eve of the incident when Abayomi came-by and urinated right in his front where he and some other neighbours were chatting.

He explained that Abayomi never heeded to caution instead, he insisted that he repeat the act, and that no one dared question him.

“The complainant was outside his house on that ill-fated day when the defendant came near and began urinating right in their front. He was even cautioned by a fellow neighbour but insisted on urinating there and promised to do it another day without anybody stopping him.”

“It, however, resulted in exchange of words and in no time Abayomi was seen coming with bottles which was collected from him. Few minutes later, he returned with two broken bottles which he used in stabbing the complainant t on his body and specifically in his right eye having missed his target on his left eye.”

An eye witness, Mr. Chukwuma Obi, who confirmed the incident, said he narrowly escaped Abayomi’s brutality which made him pounced on the helpless Emeka.

He explained, “I was also there when the incident happened. I was so surprised when Abayomi came with broken bottles over such trivial matter. We tried to stop him the second time but he appeared to be hell-bent, I was able to dodge his actions, but Mr. Emeka wasn’t, as he overpowered him.”

Although, the matter has been in court since Monday, July 25, 2016 and had since witnessed several trials and cross examinations, with judgment looking bleak however, the case was finally judged last week.