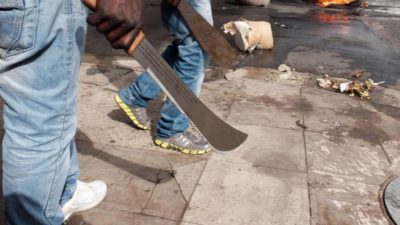 Following the strike by cult members, which claimed two lives in Ilasamaja recently, the Baale of Ilasamaja, His Highness, Fatai Abereijo, has said that the community has been put under security control with the launch of an intense community surveillance team, maintaining that the community is not under threat of criminal invasion.

The Baale, who spoke exclusively with Echonews at his residence, reiterated that the community had since initiated a community-sponsored Neighborhood Watch to ensure zero-tolerance for cultism and other criminal acts in the community.

He said that several members of Eiye confraternity that committed the atrocity have been arrested in respect of the incident that resulted to killing of two boys in the community.

A 20-year old Mariam Abiola, a member of the cult group together with other two living in the locality of the community was said to have carried out the killing.

Giving an account of the brutal incident, which he described as most unfortunate, Abereijo said, “As a matter of fact, let me start by saying it is most unfortunate that we witnessed the gruesome activities of these menaces called cultists in our community here in Ilasamaja.

“Yes, I won’t mince word; of course, we’ve been having occurrences like this but not as much as the one of recent. I think the whole issue started two weeks ago, I can’t be too specific. That night, I got a call from somebody, telling me one boy was gunned down at Temitope Street, down Ilasamaja here. Immediately, I alerted the Divisional Police Officer (D.P.O) of our division here, Inspector Titilayo.

“The following morning, the D.P.O called me back, telling me she had put all machineries in motion to tackle the ugly incidence. Not long after, I think it’s not up to an hour we heard another boy was gunned down. He was butchered at Taiwo. Immediately, we summoned the central working committee of Ilasamaja Community Development Association (CDA) and all hands were put on deck. The DPO was everywhere with her team, trying to curb the situation. That was how the whole thing erupted into a very big issue.”

Furthermore, the traditional leader explained the security synergy formed towards nabbing the culprits.

He said, “I think the DPO, in her professional manner reported back to the Area Commander and with the help of the Area Commander the whole scenario got to the Lagos State Commissioner of Police and we had a lot of special anti-robbery Squads including LNSC operatives, with the assistance of the C.P who came in to comb the nooks and crannies of Ilasa.

“Thanks to God, all these juvenile delinquents were fished out. I called them juvenile delinquent because when the arrests were made, the cultists were confirmed to be of low ages, within the ranges of 16 and 18, at most. It’s most unfortunate to witness this kind of ugly incidence among our young peers.”

Commending the security operatives for their timely intervention on the situation, Abereijo, on a scale of 100, gave a 98.5-rating to Ilasamaja police officers and reiterated his trust in the police that the absconded cult members would be caught in no time.

“I give them 98.5 per cent for their immediate response to this incidence. The police are still working on that. Some of them escaped. According to what I gathered from the police, some ran as far as Ibadan. I trust the efficacy of Nigerian police of nowadays, I am very sure the long arms of the law will so catch up with them, I am very sure about that.”

Subsequently, Abereijo confirmed that community-sponsored security surveillance has since been established in Ilasamaja as advised by the commissioner of Police, Imohimi Edgal, in order to proactively foil future cultist activities.

He said, “As a matter of fact, we’ve also cultivated the habit of community policing now. With the instruction of the CP, we have inaugurated our own Neighborhood Watch and we’ve been going all around making sure that our areas are kept safe that the residents of Ilasa can have peaceful rest, both day and night, for now the community is not under any cultist unrest.”