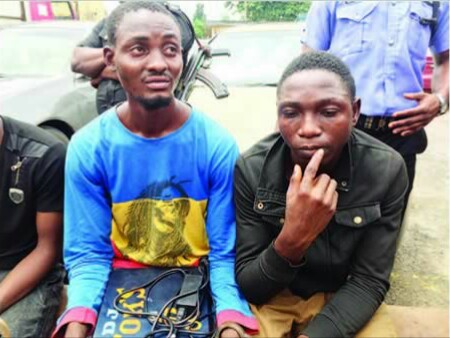 One of the teenagers arrested by the Police at Ejigbo Division on account of burgling a shop at Block 367, Jakande Estate, Ejigbo simply identified as Ajayi has revealed to the police that hunger forced him into committing the crime.

The 14-year old boy, who was alleged to have stolen and sold a laptop for the sum of N2,000, stated that he was introduced into robbery in a mosque where he laid his head after being driven out by his step mother.

Ajayi and his accomplice, a 13 years old Balogun, were said to have left a generator set believed to be of N15,000 value and opted for the laptop valued at 90,000 which they sold at the rate of N2,000.

Ajayi said that he was taken to the mosque by his father after his step-mother drove him out of the house.

He said, “I don’t even know my biological mother. My father has refused to tell me who my mother is. I don’t know if she is dead or alive.

“I was staying with my father and my step-mother until two years ago when she told my father to look for someone for me to stay with. That fateful day I stole N200 from my step-mother to buy food because I was hungry.

“She drove me out of the house when she got to know of it.”

Ajayi said it was in the mosque that he was introduced into robbery by older people he met there.

“I was introduced into robbery by the older men I met in the mosque. I didn’t have any other option as I was hungry and had nothing to eat.

“I showed it (stolen laptop) to a friend of mine who followed me to where I sold it. The uncle who bought it gave me N2,000 with the promise that he was going to give me another N1,000.”

Other valuables stolen by the duo also included an Amplifier, believed to be of N40,000 in value and a CD mixer worth N150,000.