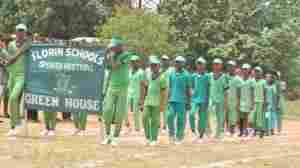 The sporting event, the 4th edition, held at the Air Force Base Compound, Shasha Lagos finished with Green house end the day as pace setters with other houses – Pink and Yellow house teams finished second and third respectively while Blue House ended the contest below every other team.

However, during the parade of match past earlier at the event, the four houses tried to outperform each other, as they put up scintillating demonstrations to the amazement and admiration of guests present.

At the end, Yellow House stole the show by emerging best, scoring 64 points as adjudged by the officiating crew. Following closely during the match past was Green House which came second with 62 points, Pink followed with 59 points as Blue came last.

Having already decided some of the Houses’ events, other track and field activities for junior and senior boys and girls were concluded and medals given to respective winners. 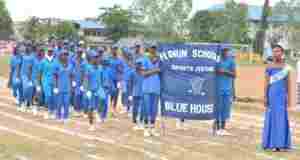 In addition to the events of the day, Cultural dances were not left out, as students of the various houses also performed to add colours to the event, while the Nigeria Police Band on the other hand played melodious renditions in different ethnic languages and foreign ones to entertain the guests.

Other recipients of prizes included David Akujobi who was pronounced the overall beat athlete of the day. 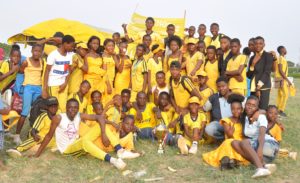 While highlighting on the importance of the day, the Proprietor of the school, Olamide Idowu, stated that school activities are never complete without the sporting events, where students exercise themselves and show their talents.

Crowd control, which usually characterises such event, was well managed as the various house masters and mistresses were seen all over the place taking charge of situation.

The electrifying moment was when the Green House was pronounced overall winner of the 2018 inter house sport by the Master of Ceremony (MC), leading to house members jubilating in wild celebration for a job well done.

It would be recalled that at the school’s 3rd inter house sport contest in the year 2016, Green House  came first followed by Yellow House in second position, Blue House in third  and Pink House taking last.