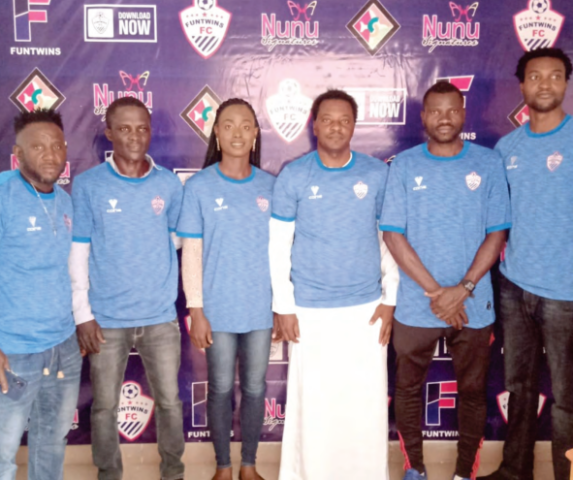 Having a club side in Nigeria and equipping them with the tools to make the club a standard one actually cost a lot of funds.

Recently, Funtwins FC was launched as staff of the club were introduced including the general manager, team manager, coach, secretary and a host of others.

The club has also been equipped with state of the art equipment for the running of the club.

Funtwins FC was established to create a pathway for players who are aiming to seek greener pastures outside the country legitimately.

Speaking to ECHONEWS, the secretary of the club, Igho Odibo said that it’s a privilege for her to be part of the Funtwins FC family as she promised to  give her best for the growth of the club.

The general manager of the club, Prophet Samuel Obidoyin described Funtwins FC as a club aiming for greatness.

“Funtwins FC is a professional side that’s looking out for quality players, rebrand them to international standard and trade them to professional club sides.”

The coach, Oladiran Abass stated that, “I’m extremely happy to be part of Funtwins FC, when I was introduced to the project, I find out that I have keen interest in it.

“As the coach of the team, my major objective is to develop good players that are marketable and that can be profitable to Funtwins FC.”

The Team Manager, Oluwagbemi Oluwajoba noted that he will make sure the team is run well.