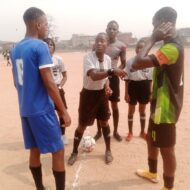 The Extra Quality Preseason Tourney have entered the quarter final stage where 8 teams will slug it out of which, 4 teams will advance to the semi-final of the competition.

Host team MS Success FC who defeated Shola FC 2-1 in the knockout stage will face King Spor FC in the first quarter final on the 27th of January 2022 by 4pm at Eko Boys high school, Mushin. The defending champion, MS Success FC will be hoping to continue their great performance as they will also be banking on their home fans for unlimited support.

In the second quarter final match, FC Robo Warriors will clash with Surulere based club side, Utility sport who slipped through to the quarter final through a penalty shootout victory over Junez International and they will be playing on the 28th of January 2022 by 4pm. This match will be a great battle between two great sides and it will be an exciting one to watch.

High flying Diadem Stallion of Isolo will trade tackles with Wilson FC on the 29th of January 2022 by 10am and it promises to be a great encounter.

The last quarter final game between Mushin based club side, Satech FC and Jumez international of Surulere which will be kicking off by 12pm on the 29th of January 2022 will amount to two good sides which will be banking on their team strengths to advance to the semi-final. Jumez International will depend on their pacy attackers to get the job done for them while Satech FC will depend on their natural strength, which is the midfield also.

All matches will be played at Eko Boys high school Mushin.