Eid-el-Kabir: Olaleye enjoins Muslims to submit to Allah’s Will 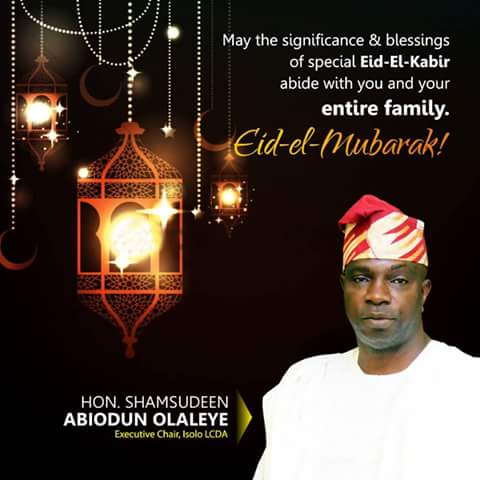 As the world marks Eid-el-Kabir festival, the Executive Chairman of Isolo Local Council Development Area (LCDA), Hon. Shamsudeen Olaleye, has sent his goodwill message to Muslims in the council area on the occasion of the Muslims’ second most important annual festival.

Olaleye, who incidentally is the Turaki Adinni of Isolo Central Mosque enjoined Muslims to uphold the significance of Eid-ul Kabir which honours the willingness of Ibrahim (Abraham) to sacrifice his son, Isma’il (Ishmail) as an act of submission to God’s command, before God then intervened, through his angel Jibra’il (Gabriel) and informs him that his sacrifice has already been accepted.

According to him, total submission to the will of Allah which typifies the first article of faith should be the daily guiding principle of every Muslims especially during the current socio-economic and political upheavals plaguing the country.

He enjoined Muslims and people of other faiths to have the fear of God in their dealings with one another noting that when people are guided by the fear of God, they are most likely to conduct themselves well in their public and private lives.

“In these trying periods of our national life, we need to have the fear of God to paddle our nation to the Promised Land. We must submit totally to the will of God In every of our actions and inactions.

“Now more than ever before we must look up to God to see us through these difficult times of our country even ahead of the forthcoming general elections. We must eschew peace during and after the electoral process. We must resist temptation to foment violence as no Nigerian blood should be shed on the altar of ego and personal ambition,” he said.

As Muslims across the country celebrate Eid-el-Kabir, the council boss however admonished them not to lose sight of their civic responsibility by obtaining their Permanent Voters Card (PVC) which would allow them to vote during the general elections next year.

“In the midst of the celebration, we must not forget to obtain our PVC which will allow us to vote during elections. You cannot complain of bad government when you refuse to take part in the election process,” says the council boss.