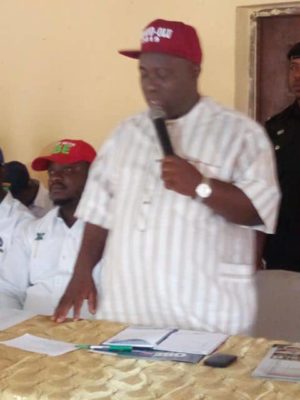 The Executive Chairman, Ejigbo Local Council Development Area (LCDA), Hon. Monsuru Bello, has reiterated his commitment towards the development of the community, urging the to cast their votes for the All Progressives Congress (APC) in 2019.

In his New Year message forwarded to Echonews, the Council Chairman said he and his cabinet members as well as all council workers have decided to work harder to get things done on time for the benefit of the residents.

According to him, the residents – both indigenes and non-indigenes deserve to be catered for adequately for their supports and cooperation with his administration over the year, saying they have been the motive behind his much-recorded achievements in the previous year.

While felicitating with the people of Ejigbo on the turn of a new year, Bello reiterated his plans to actualise more of the exploits made in the year 2018.

He stated: “To the distinguish people of Ejigbo LCDA both indigene and non-indigene, I am more than elated as we have bidden 2018 farewell and usher in a new year 2019.

“I felicitate with you as we embark on another journey from January to December, may the best of the best be our portion by the special grace of the Almighty God.

“I thank you for your support of yesteryears, for believing and keying into my vision, the way and manner you subscribed to it have always been the needed impetus that has spurred me to do more.

“On behalf of myself, the councillors, the supervisors and special advisers, I congratulate and wish you a prosperous New Year.”