Bamigbetan’s house robbery: No arrest has been made yet, still investigating – Police 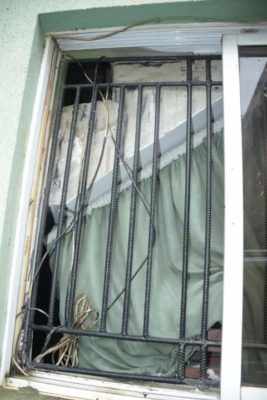 One of the broken windows at Bamigbetan’s house

The Divisional Police Officer (DPO), Ejigbo Police Station, CSP Olabisi Okuwobi, has disclosed that the police are yet to make any arrest concerning the robbery operation that took place in the home of the Lagos State Commissioner for Information and Strategy, Hon. Kehinde Bamigbetan and two other houses in the neighbourhood in the early hours of Wednesday, the 10th of October, 2018.

Okuwobi said that the police are still on top of the matter as they are still making some investigations to get their fact right while the hunting for the perpetrators continues.

She assured that the suspects would be soon apprehended and brought to book.

It was gathered that a gang of gun men about seven in number, identified to be armed robbers invaded the commissioner’s house at about 1:30 am Wednesday, beat up the security guard on duty after they had jumped over the fence to gain entrance into the compound since they did not meet the commissioner who together with his wife was said to be in Nairobi, Kenya getting ready to preside over the Third Africa Political Summit organised by the Association of Political Consultants -Africa.

They removed the sliding windows to gain entrance into the main building were prevented by the iron burglaries.

When their operation was not successful at the commissioner’s house, they left for other houses within the area.

One of the victims of the robbery whose wife was battered by the robbers, Justice Njoku, told our correspondent that the robbers carried out the operation based on information.

He explained that he had earlier been called by an unknown person around 11pm on Tuesday informing him about the presence of robbers in his area.

He narrated that some of them had been waiting at his gate while some others waited for him at the entrance of Ona-Iwa Mimo Street.

He said, “When I entered the street around 1am, I saw some of them on the street, they accosted me and followed me home. They asked me to call my wife to open the gate. Some of them were at the gate already waiting.

“Upon sighting them, my wife rushed inside and shot the door. They had to break the window to enter.

“They said their informant had told them that we had cash inside but unfortunately, there was no cash at home. I had just only N1,500 on me which they eventually took away with all our phones, gold jewelleries and my wife’s handbag with her money.

“They cut my wife’s hand with cutlass and hit her on the face because they asked her to lead them to where the cash was which was unavailable. They eventually left when they discovered that there was no cash inside.”

However, Njoku claimed that the members of Oodua Peoples’ Congress (OPC) manning the street did nothing to rescue the situation.

He further alleged them of preventing the police from getting the robbers.

According to him, it was the OPC members who told the police that the robbers had gone when they (the police) came around, misleading them when those robbers were still operating in his house as at that time.

He said they spent more than one hour in his house.

Meanwhile, Bamigbetan, in a statement, commended the police team under the leadership of the DPO for their prompt effort, saying he has confidence that the police would soon get the perpetrators arrested.

“I thank the DPO, Mrs. Okuwobi for deploying her officers promptly to the scene. The investigation continues. This is the first attempt since we moved in 2006. We shall explore all angles to ensure that the perpetrators are brought to book. I thank God for his protection always. The needle passes before the path of the thread blocks.

Narrating the incident from his own account, Bamigbetan said, “A serious breach of the security of my home, 21 Ona Iwa Mimo street, Ejigbo, Lagos occurred late night yesterday. I was in Nairobi, Kenya getting ready to preside over the Third Africa Political Summit organised by the Association of Political Consultants -Africa which commenced this morning.

“The accounts indicate that about 10pm, seven youths drove into the street in a red utility vehicle and parked in front of my house. One of them jumped over the fence and accosted my security guard, overpowered him and opened the gate for five others to join him. The last stood outside to watch.

“This group ordered the guard to take them to the rear of the building where I live and asked him to facilitate entrance. The guard reported that there was no one at home but they apparently didn’t believe him. They went to work immediately, removing the sliding glass windows and then brought instruments to cut through the iron bars that served to check burglars.

“They were still at this when the monitor outside alerted them of an advancing vehicle suspected to be the police. They got into their car and turned in the opposite direction from the police patrol car and sped away.

“I want to thank my neighbours and others for alerting the police as soon as they learnt of the operations.”

Meanwhile, A source close to Bamigbetan’s house told Echonews that the robbers might have learned the the Commissioner neither uses police and or other uniformed security agents to man his house or as escorts.

The source said that Bamigbetan is one of the political office holders who hate being escorted by police.

According to the source, the Commissioner believed that the grassroots people who troupe his house on daily basis for one type of help or the other might be scared away by the presence of police around him.