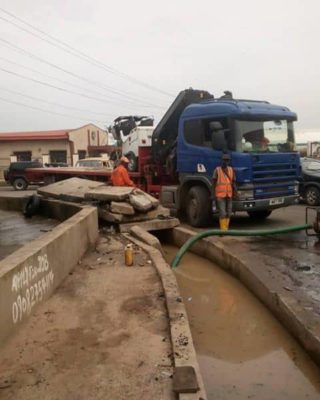 The Lagos state Government (LASG) has today embarked on a repairing process at NNPC Junction, Ejigbo LCDA in an attempt to forestall occurrence of flood and curb the unwanted situation of traffic congestion in the area.

LASG employed the services of a 10 man team from Nesserm, a private company with the rehabilitation process after several complains from the residents in Ejigbo who stated that the area which comprises of the Council Secretariat should not be seen in such situation as it’s a bottleneck for free flow of traffic in the area.

The 10 man gang was seen distilling the drainages and rehabilitating the road which was disclosed to be a 5 day exercise.

The workers disclosed the importance of shunning refuse dumping into the gutters around the community as it’s a quick way to prevent flooding in the area.

The Executive Chairman of Ejigbo LCDA, Hon. Monsuru Bello showed appreciation to the state government for coming at the right time to put correction on the road and the gutters in the area.

Bello also called the attention of the government to not only help clear the drainages at NNPC alone but also look into other areas in the area to overcome flooding.

The council Chairman also stated that the residents of the community should continue the work done by the state government and inculcate in themselves the importance of making sure the community is kept clean for habitation.