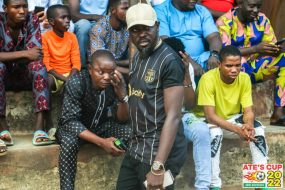 The ongoing Ate’s Cup in Isolo have reached a point where teams are fighting hard to reach the next round of the competition.

The elite tournament have seen a total of 13 teams that have qualified to the round of 16 and it remains 3 more teams to seal up the ports of the next round.

Speaking to ECHONEWS, the sponsor of Ate’s Cup, Fuad Akintunde popularly known as Ate Money said he’s impressed with the behavior of the teams so far.

“I’m impressed with the behavior of the teams so far, they have displayed a high level of unity and cohesion.

“The next round will be an explosive one where all the teams will be vying for a place in the quarter final of the tournament.

“Kudos to our teeming fans for turning up big time to watch the matches in the community, we appreciate them more and to our amiable chairman of Isolo LCDA, Hon Bayo Olasoji for supporting the growth of football in Isolo LCDA.