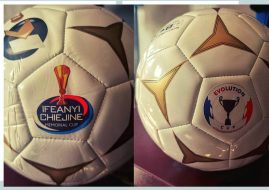 The maiden edition of the Ifeanyi Chiejine Memorial Cup will hold in Asaba, Delta state on the 15th of December 2022.

Ifeanyi Chiejine Memorial Cup will be used to immortalize and celebrate the former Super Falcons player and a member of the 1999 squad, Ifeanyi Chiejine, who while alive was a great personality who dedicated her life to the development of women football in Nigeria.

The timely donation was well received by the convener, Judith Chime in preparation for the sporting event which comes up in December.

Speaking after donating the balls, Project Strategist of Evolution Cup, Olatoye Olawale revealed the reason for the support.

“We need to support the Ifeanyi Chiejine Memorial Cup and the convener, Judith Chime is a friend and also an ex-international who represented the Super Falcons.

“Evolution Cup is all about development and making progress and this initiative goes in line with our goals. This is why we have donated match balls for the Memorial Cup. It’s a way to also encourage talent from grassroots.

“We plan to do more of this, as Evolution Cup is not just about our tournament, it’s about how we can also support initiatives that is in line with our goals.” Olatoye Olawale said.