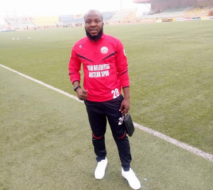 The organizer of the Akanni Soccer Fest, Oluwaseyi Ogunwale popularly known as School Boy has highlighted the reasons why he decided to organize a tournament for dubbed ‘the elders’ competition for people above the age of 43.

School Boy noted that purpose of the competition is to take football to the next level among the elders that were once active in the game as he spoke glowingly of the sponsor of the competition Alhaji Akanni, who he said is a philanthropist and have impacted the lives of people in the community.

“ chose the elders because, the tournament is for fun and to also make them stay healthy (you know the saying that says ‘health is wealth’) as football is also a means of exercise.

“Alhaji Akanni is a good and respected man with a golden heart, he’s also a philanthropist who loves given back to the community. So I decided to host this tournament in his name as an award being given to him back from the community to show appreciation for all his good deeds. Also him sponsoring the Akanni elders tournament would create more awareness for him in the society and these will also have positive impact to play in the future.”